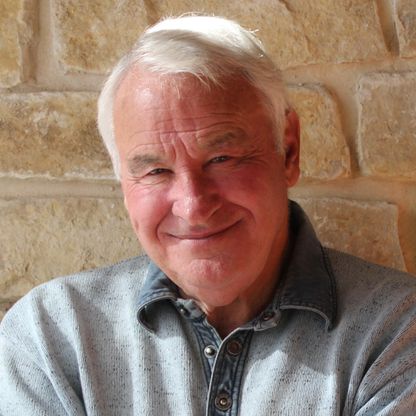 Self-made multi-billionaire and philanthropist Tom Golisano had an incredible rags-to-riches story to tell. He’d built his start-up, Paychex, into a $30 billion corporation, ran for governor of New York twice, bought and sold the Buffalo Sabres, launched the Clinton Global Initiative, and given hundreds of millions of dollars to charitable causes.

One thing he hadn’t done was publish a book–and family and friends were begging him to write one. He had started working on one, with some help from a writer friend, but wasn’t happy with it.

In 2018, Tom approached Kevin Anderson & Associates over the Christmas break to see if the firm could get him back on course. Less than three weeks later, Kevin and a team of bestselling ghostwriters, editors, and former book publishing executives traveled to Tom’s home in Naples, Florida to meet with him. 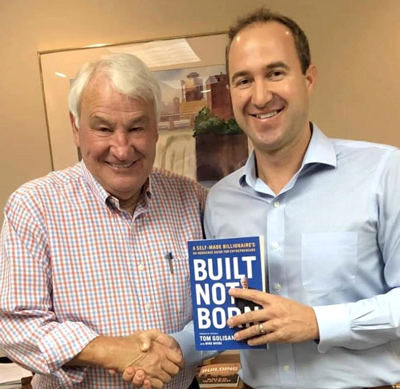 Tom and Kevin in Rochester, NY

For the next four days, the group brainstormed and strategized how to produce a book that best captured Tom’s entrepreneurial journey.

Tom was initially interested in publishing a memoir, but the KAA team concluded that, given his entrepreneurial background, his odds of publishing success were higher if he first produced a business book. Not only would it expand his reader base beyond Paychex, but it would make a follow-up memoir that much easier to sell. It would build name recognition and demonstrate sales potential.

Mike Wicks, the lead writer, stayed in Naples for several weeks, working with Tom and shadowing him as he conducted his daily business. Mike drafted pages and brought them to Tom each morning so they could go over them in detail. Mike then revised them as needed, in order to perfectly capture Tom’s style and unique voice. As chapters were completed, the KAA editorial team reviewed the manuscript and provided editorial feedback, refining the story line and language along the way.

Meanwhile, Mike and the editorial team developed a publishing strategy and prepared a book proposal that Kevin shopped around to several notable literary agents. Celeste Fine of Park & Fine ultimately chose to represent Tom and his manuscript.

Kevin accompanied Tom and Celeste to a series of meetings with publishers in New York City before the book went to auction and sold to HarperCollins Leadership in a mid-six-figure deal.

After the book went to production, the KAA team continued to meet with Tom and HarperCollins every other week to discuss various publication-related items, such as book covers, potential titles, and marketing strategies. Prior to publication, Tom invested considerable time in media appearances–podcasts, feature articles, television appearances, and more–elevating both Tom’s public profile and that of Paychex.

The result? Built, Not Born: A Self-Made Billionaire’s No-Nonsense Guide for Entrepreneurs hit multiple bestseller lists for several weeks, including rising to #2 on the Wall Street Journal and Publisher’s Weekly bestseller lists, and rising to the #1 business book on Barnes & Noble, further giving Tom and Paychex widespread exposure.

Tom was interviewed or quoted on Fox & Friends, Yahoo! Finance, Investor’s Business Daily, and Medium, and debuted as the #1 business book on Porchlight during the month it released.

In 2020, Tom and the KAA team worked together again, finishing Tom’s memoir, which KAA agented and sold directly to HarperCollins Leadership for a 2022 release. 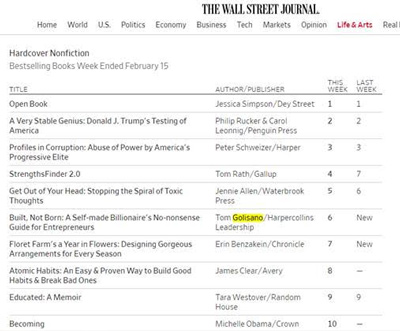 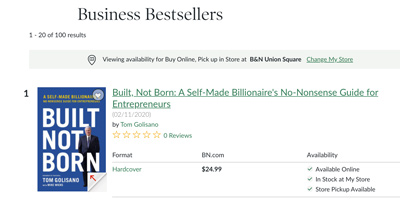 Interview, Morano in the Morning:
https://omny.fm/shows/morano-in-the-morning/6am-hour-march-29th-tom-golisano-has-advice-for-en

Interview, What Got You There with Sean Delaney Podcast:
https://whatgotyouthere.com/portfolio_tag/tom-golisano/